BOOK REVIEW: FLIGHT OF THE FALCON Story of a Fighter Pilot by S. Sajad Haider

Sajad Haider’s (SJ) name made headlines, both in war and peace. The former remains his legacy, faithfully revisited every September. The latter became a fleeting moment in history, which no one talks about. This story would be incomplete without either - its shock and awe value – lessened, considerably. But when Haider’s debut novel - Flight of the Falcon, sets out to demolish myths of Indo-Pak wars 1965 & 1971, several other fine illusions became collateral damage in the process.

His legendary exploits during battle, notwithstanding, Haider’s fall from grace was swift. A recurring role in controversies (domestic and international) plagued his professional career. Refusal to conform caused its premature end. Out of these extraordinary, if unorthodox life experiences, is born a story that flaunts the unwritten code of silence typically held sacrosanct.

Haider saw action in both wars as commander of a fighter squadron (‘65) and a tactical fighter wing (‘71). Speaking from such a unique vantage point has advantages. It has been used to assess PAK military operations and political adventurism of that era. This fact finding mission clears away prevalent misconceptions about PAF’s alleged lacklustre performance in ’71 - indicts top leadership (military and political) for ineptitude – cross references claimed kills (aerial) against recorded data and berates the system for letting air-brushed versions of history become impediments. It does so by amassing a repository of previously documented facts and figures from both sides of the border in the hope that this serves as a catalyst for ‘deeper more incisive probes’ in the future.

To call them ‘sensational revelations’ would be inaccurate, for our war time fiascos have spawned many books and articles by local and foreign observers alike – neutral or otherwise. Exhuming carefully crafted fairytales is not uncommon. Treading what was once considered to be hallowed ground has been in vogue for quite some time. The puzzle – in this case our history - comes together more easily with so many pieces to choose from. The issue is separating true historians on a quest for truth from vindictive pseudo analysts trashing institutions for sport. Now, all these versions compete for attention with another that has a personal stake in resurrecting old ghosts as Haider re-lives painful memories of his incarceration in the final half of the book to identify the burgeoning turmoil within his professional life that became a precursor to witch hunts against the crème de le crème of our PAF. But there is more to this cautionary tale of lost opportunities and political decay. ‘Flight of the Falcons’ vividly captures these magnificent men in their outnumbered flying machines at their finest – as creators of The Falcons Four (world class formation aerobatics team) and champions of air combat (65/71) war. It is a fitting tribute to the unsung heroes, martyrs and regular men in service for accomplishing what they did with whatever little they had.

Haider’s journey, from his most triumphant moments to the bleakest hours plays out like a Shakespearean drama where, according to one observer, he is a ‘maverick, top gun and Casanova’ rolled into one, forced to go through an obstacle course laid with incarceration, intrigues, and tribunals. And while one-sided versions, however committed to the pursuit of truth, require the occasional suspension of disbelief when shades of grey are carefully edited leaving the ‘shining armour concept’ intact, they are no less entertaining.

The writers 8 years spent in the business world could spawn a sequel; one that will go after the wheelers and dealers, or as he puts it, ‘crocodiles and piranhas’, who define the underbelly of ‘the Pakistani business world’. Someone who once told President Zia exactly what he thought of his regime should have no qualms about putting up an encore performance. Back in the day, Nosey – as he is referred to by his peers - stepped on powerful toes. Today, his book continues the tradition.

Since its launch in May 2009, Sajad Haider’s book has sent ripples across the nation and garnered responses from different parts of the world. The second edition has already been sold out and a third, revised version of Flight of the Falcon is under print. The upcoming edition has been further amended to include additional comments by the author where he reiterates his views about the 1965 and 1971 wars; revisits 6th of September to analyze, what he labels as command failures at Mauripur and Sargodha, and their contentious decision making process that resulted in the ‘avoidable loss of Sqn Ldr Sarfraz Rafiqui and Flt Lt Yunus Hussain’ – jewels in the PAF’s crown. An incident about Pilot Officer Rashid Minhas has also been updated. The botched hijack attempt has now been replaced with one attested by Grp.Capt. Zaheer Hussain - President of Air Investigation Board, who was also the officer in charge of the original investigation. The revised epilogue has been topped off with some scathing commentary - and the nuclear Godfather of the nation - Dr. AQ Khan does not come off well when it is over. The third edition is expected be on the shelves in about two weeks.

Acknowledgement: Thank you Darakhshanda Khurrum for the maverick comment. It got me in trouble but hey...:)

UPDATE: The Urdu Version of this book called "Shaheen Ki Parwaz" will be available from 5 Oct 2010

Popular posts from this blog

By Afrah Jamal June 18, 2011
Thanks to Liberty Books for the review copy

Published under the title: 17 Reasons to Hope

“History will be what we make it. If we go on as we are, history will have its revenge and retribution”— from the movie, ‘Good Night, & Good Luck’

A region known for most “terrorist sightings”, a place feared for harbouring medieval mindsets next to progressive thinkers and a nation shunned for having an affinity for nuclear toys. By turns a cautionary tale, an indispensable ally and an international pariah, Pakistan does not fit into any mould — for long. But its name crops up whenever things go awry.

Pakistan: Beyond the ‘Crisis State’ is a compilation of articles put together by Maleeha Lodhi that countermands the grim prognosis. When Ms Lodhi, who has served as Pakistan’s ambassador to the US and UK, acknowledges that “resilience has been part of Pakistan’s story from its inception, obscured by the single issue lens…
4 comments
Read more

Translated from French by Priyanka Jhijaria

A programme about Hira Mandi did the internet rounds a couple of years ago. It claimed, among other things, that the sons of the ‘dancers’ reportedly end up as lawyers, doctors, artists — a few join politics and some even reach the military. These outrageous statistics may be one of the reasons the documentary was banned from the mainstream media. That and its primary premise — the plight of the fallen women — would prompt the conservatives to howl with dismay before scurrying off to bury any evidence in the backyard along with other bodies.


Claudine Le Tourneur d’Ison embeds such wrenching moments in a bold narrative where its doomed protagonist can hail the brave new world and its genteel patrons from an extraordinary vantage point. The expedition to the underworld with the unfortunate progeny and the hapless…
Post a Comment
Read more

Books allow people to have their say. Diaries express what they actually meant. Therefore, every prominent personality must stray from the path of political correctness and leave behind a diary. One way to regain an insight into the defining moments of our history post ‘65 War would be through the diaries of Pakistan’s first military ruler and first C-in-C, Field Marshal M. Ayub Khan, who also authored the book, ‘Friends. Not Masters’. The personal lives of public figures are always intriguing; while their contemporaries indict/acquit them on consequences of their actions, diaries give individuals a rare shot at swaying the upcoming generation of juries. Recorded during the uneasy calm before an inevitable storm brewing on the Eastern horizon and Indian front, the entries, spanning 7 years from September 1966 - October 1972, are replete with shrewdness and candor of a narrator who observed the events initially as a key player…
1 comment
Read more

By Afrah Jamal September 28, 2014
Published (sans my name) in Daily Times / Karachi pages 28 Sep 2014. Hope someone fixes the mistake in their online edition.

Thank you Pheby Haroon for the invite.

NY Times casts Afghanistan in a new role as the ‘Saudi Arabia of Lithium’. A spy thriller that views the discovery of mineral wealth as a double edged sword is coming soon. ‘O21’ reserves this backdrop, and envisions the regional implications from the resultant tug of war between powerbrokers / allies clamoring for their share.
While the premise spawns endless conspiracy theories, espionage appears to be a logical extension of the counter-terrorism angle. The Af-Pak / US trinity becomes the perfect foil for those driven by a desire to put events on this side of Durand line in context. Before ‘O21’ makes its official debut, the press were invited to Nueplex Cinemas (Karachi) to meet the cast.


Among them was Azaan Sami Khan – CEO, ‘One Motion Pictures’. It is his first undertaking as a producer. The mantle of executive pro…
Post a Comment
Read more

By Afrah Jamal July 21, 2012
Thanks to the lovely Nefer & Haya for the launch Invite

Published in Daily Times / Jul 21, 2012
Under the title: So You Think You Can Escape?
Reviewed by: Afrah Jamal

'In this game there are no second chances. You either win or you die.’

The man who penned these words 41 years ago was busy planning his escape from an Indian POW camp that was not really supposed to exist. Today, as a defence analyst who owns a successful business empire, he sits amiably on a stage flanked by officers from his old command, some well-known personalities from the media, and at least one fiery cricketer-turned-politician who aspires for the premiership. (See Pix Here)

The extraordinary tale of a Pakistani army captain adrift in enemy territory who went knocking at the US Consulate gate and the American Marine Sergeant on duty who saved the day (part of it anyway) appeared in print a few years ago. That, however, was not the end of the captain’s ordeal. What happened in the interval before Sgt Frank A…
4 comments
Read more

By Afrah Jamal February 26, 2011
Thanks to Liberty Books for the review copy

Published in Daily Times / Saturday, February 26, 2011
Under the Title: A Play-book for Losers
Reviewed By: Afrah Jamal
Author: Rujuta Diwekar

Master: “You are free to eat.”

Po, the Kung Fu Panda, doubted his mentor/master much like readers will doubt a nutritionist guru when she hands over an exclusive pass to eat and, yet, maintain a strategic advantage in the fight against fat.

A thriving industry feeds off of ignorance about weight-related issues. And when health and happiness become collateral damage in the mad dash for the finish line, it is time to alter the game plan.

‘Nutritionist to the stars’ Rujuta makes this lonely trek to the promised land a joyful experience where food is not the enemy, and learning the art of making better judgment calls is on the menu. Since she labels the struggle with weight loss a tamasha (spectacle) at the very outset, r…
11 comments
Read more 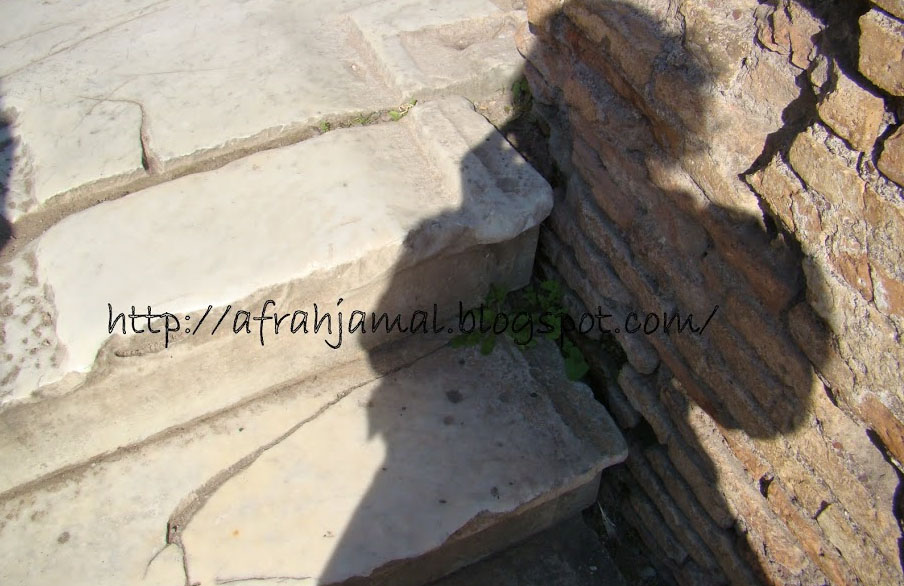